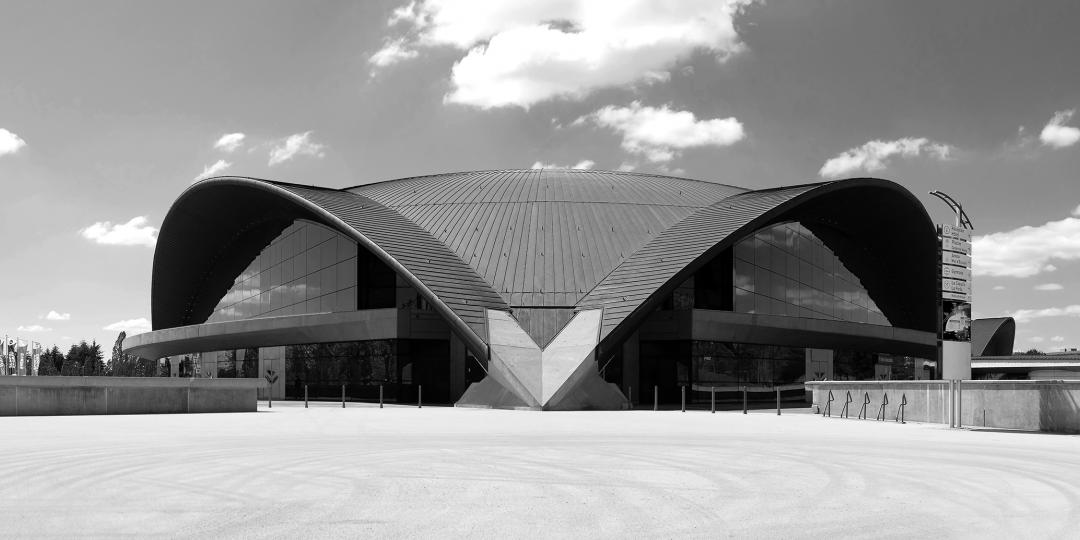 History of the Coque

Easily accessible from all parts of the country and from neighbouring countries, strategically located on the Kirchberg plateau, within a short distance of the centre of the capital, the banking and business centres, the European institutions and the international airport, the National Sports and Cultural Centre of the Coque has become an essential reference both in the Grand Duchy of Luxembourg and in the Greater Region, and on the international scene. This success was built in stages, driven by the will of the Luxembourg authorities and by the dynamism of the Centre's team. All these elements made it possible to begin writing a formidable saga whose first lines date back to 1969.

Birth of the idea of setting up a National Sports Centre

Until the 1960s, Luxembourg had very few sports facilities. The authorities responsible for the national sports policy were aware of this problem and decided to develop an ambitious project to rank Luxembourg at the top of the "small countries become great sports nations". On 12 July 1969, then Minister of Physical Education and Sports, Gaston Thorn, organised a large round table. The aim was to discuss the construction of a new sports centre adapted to the most modern requirements and criteria. This centre was intended to have a national impact, but its initiators’ ambitions were farther reaching: it had to become a reference within the Greater Region and on the international scene. To achieve this, it had to provide the best infrastructure for athletes of all levels - from individual amateur sports enthusiasts to high-level athletes, schools, clubs and federations - and enable the sports elite to have access to the same opportunities as their foreign counterparts at major international events.

From the outset, an Olympic swimming pool, a multi-sports hall promoting indoor athletics and an outdoor stadium including various playgrounds were planned. The design of the complex was entrusted to French architect Roger Taillibert who unveiled a bold concept in February 1974. His architectural concept was elegant, modern and even futuristic. More detailed plans showed that the project could be built in two successive stages, with priority given to the Olympic swimming pool that opened its doors in April 1982.

The project of a National Sports Centre takes shape

The economic circumstances being what they were, the second phase of works, centred around a multi-sports hall, only began in 1985. Various projects were considered, and priority was finally given to a multifunctional and versatile complex to be developed on the Kirchberg plateau. This new approach was particularly ambitious: the infrastructures were to prioritise sports, but they were also required to become a leading cultural destination and a major convention centre.

The multiple positions and priorities specific to the various stakeholders interested in the project, as well as the urban planning modifications affecting the Kirchberg plateau, delayed the project despite the insistence of the Luxemburgish Olympic and Sports Committee - COSL which forcefully requested that the Centre be built as soon as possible and which repeatedly invoked the impact that it could have on the progress that the national teams and athletes would make in the field of competitive sports.

Very quickly, the Luxembourgish Olympic and Sports Committee - COSL - emphasized the need to complete construction on the National Sports and Cultural Centre as quickly and as efficiently as possible. A few years after the Centre’s opening, André Hoffmann, President of the COSL, made a very positive and encouraging initial assessment of the centre, especially for top athletes: "The Coque opened up new horizons in our approach to training our athletes and also in the field of organising sports events. At any time of the day, our top athletes can freely access the facilities and the weight room. In addition, the infrastructure of the Coque also provides physiotherapeutic services provided by the physiotherapy practice attached to the centre".

It is finally in 1996 that a final project was selected: the Act of 2 May 1996 authorised the construction of a National Sports and Cultural Centre in Luxembourg-Kirchberg for a sum of 2.5 billion francs (around 62,000,000 Euros). A call for tenders was launched for the construction of the Centre, and works officially began in December 1997: the ground was broken in a symbolic and hopeful ceremony held in the presence of the Minister of Public Works, Robert Goebbels, and the Minister of Sports, Georges Wohlfart.

As Minister for Sustainable Development and Infrastructure, Claude Wiseler was sensitive not only to the many vocations of the Coque, but also to its aesthetics and the architectural audacity that characterised it: "The Coque was a project that sparked much discussion. Its architecture is very special: 4 large shells, prestressed reinforced concrete and a part of the construction made from wood. This raised the question as to whether such architecture was suited to a large sports arena. Today it is obvious, when looking at the building from the outside, that we are faced with an exceptional construction that is noticeable even when passing by car. The building is also unique on the inside, with its eye-catching and unexpected shapes: warm and welcoming lines. That is why its success does not surprise me. The Coque was able to find its place in the architectural landscape of Kirchberg.".

The Coque: a public establishment

In parallel with the beginning of the works, a draft law aimed at creating the public institution that would manage the Centre was being drawn up. The main concern was that of being able to combine the new infrastructure’s many intended uses (sports, culture, events, etc.) with a wide range of events, activities, camps, training sessions, competitions, and more. In addition, the new public establishment in the making also had to include an Olympic pool.

On 29 June 2000, a law created the public establishment, granted it legal personality, determined the sports complex to be operated and set out the management’s duties according to the facilities’ various intended uses: sports, culture, congresses, accommodation and hospitality.

The High-Performance Training & Recovery Centre (HPTRC) project was born from the idea of promoting elite sport in Luxembourg by creating the best possible training environment in terms of infrastructure, equipment and human resources. The HPTRC is intended to be a priority service provider of the Luxembourg Institute for High Performance in Sports (LIHPS) and is therefore in line with the political will of the Ministry of Sports and the Luxemburg Olympic Committee.

The HPTRC, as a "high performance" training centre, focuses on elite sport by providing specific, innovative and scientific equipment together with all related services, such as performance diagnostics, video analysis and recovery measures. The main objective is to advance Luxembourg's elite sport by supporting athletes from the COSL and federations.